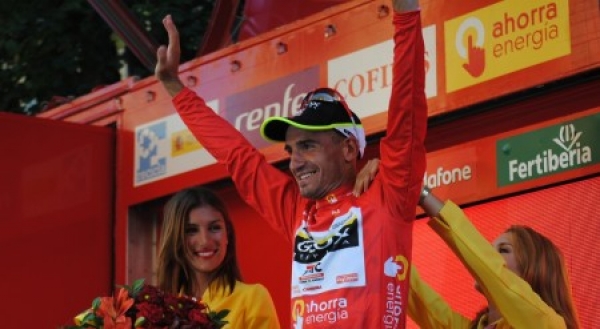 It was just a hair that separated Juanjo Cobo from the joy of dominating the roads of his home country to win on the finish line in Peña Cabarga, in the first of the stages that are taking the Vuelta España into the region of Cantabria. Cobo nevertheless is holding on to the leader’s red jersey after proving again today that he’s one to watch in this Vuelta, in what seems to have become a two man duel between Cobo and Froome. In fact, only the Englishman from Team Sky managed to challenge the Bison from la Pesa and rob him of the satisfaction of winning and sending the friendly crowds in Cantabria into a frenzy.

“Today I was missing a little something to be able to capture another victory,” explained Cobo, who in addition to the red jersey is also still wearing the white jersey for the combined classification. “For me it would have been really the best here on these roads in front of my fans, but it wasn’t to be and Froome deserved the victory. But I’m looking on the bright side, today I also managed to hold on to the leader’s jersey after a tough stage and put some more distance between a dangerous rival like Wiggins (who remains third in the general but who lost another 50” to Cobo). Now there are three more really challenging days but with the help of the entire GEOX -TMC team I’m going to do whatever it takes to defend this jersey.”

“We missed a stage victory which would have crowned the day,” explained Sports Director Joxean Fernandez Matxin. “Cobo raced well, however, proving that he’s really strong; Froome and he engaged in a spectacular duel and in the end man to man Froome won. Anyway, we’re still ahead in the general classification and this is the most important thing. Today the team managed to save some energy and take advantage of the work by other teams like Katusha, Vacansoleil and Euskaltel who were aiming for a stage victory. This allowed us to give it our all in the final, Menchov did a great job on the climb on Pena Cabarga; here’s a winner of three major stage races putting himself at the service of his team mate; it was really a grand gesture and it says a lot about the character of this champion. And De la Fuente did a great job all day giving it his all even on the last climb, which contributed to the lead in the team classification.”

Tomorrow will be the second day on Cantabria territory, from Solares to Noja, a half mountain stage which will be an important test for all of GEOX-TMC. In addition Cobo can also wear his red in front of his people of Cantabria, whose governing council has been a team partner for several years.