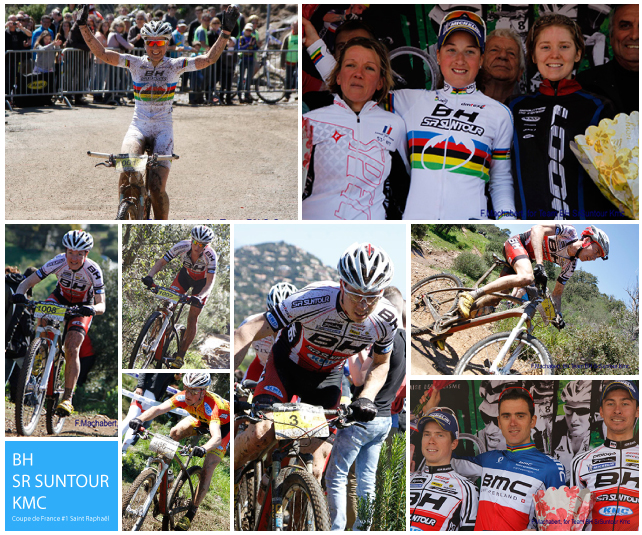 Fourth consecutive victory for Julie Bresset on the French Riviera's course ; Maxime Marotte and Stéphane Tempier on the podium ; Pablo Rodriguez battles with the bests U23 riders : this has been a promising test.

Since 2008, the French National Cup starts on the foothills of the Esterel, on the Mediterranean coast. For her real "back to racing", after two events at home, in the Côtes d'Armor, Julie stamped her authority on her first UCI race of the year. Since 2010, nobody has been able to worry her here, and this time, she won with a (very) comfortable gap of 4'04''. Hélène Marcouyre finishes on the podium, while Laura Metzler, still lacking a bit of training time, took seventh place, after having headed a long time for a top 5. In the men's race, Maxime Marotte and Stephane Tempier, still building their fitness level, before major deadlines, are taking 2nd and 3rd places. Pablo Rodriguez finished in 12th place scratch, 5th U23.

Julie Bresset: "It's good to start the season like that. I am still in preparation and my targets are set far later. It was pleasure to manage the race that way. I will now take part in two rounds of the MTB Bundesliga (Münsingen, and Heubach), to continue my preparation."

Helen Marcouyre (4th): "There has been a great battle with the young (Clauzel and Moschetti), in the top five. I was afraid to ride a little too fast, early in the race, making many mistakes ; but later, we rode together with Laura, helping each other. This is a good beginning for me, now I will test me on another style, on the Roc Laissagais XCM. "

Laura Metzler (7th): "I was with Helen during the race, but I have not a lot of miles, and I paid my efforts at the end of this long race. I mainly focused my training on running workouts, this winter. Now, even if I fell not so good today, there are still positive signs, I'm on the right way... "

Maxime Marotte (2nd): "I made a mistake in a downhill, and I lost ten seconds on Stéphane and Julien. Then I found myself alone. Julien was stronger today. The goal was not to be in a great day, but I would have liked to stay longer with him. Now I will race a Swiss Cup round, next week. "

Stéphane Tempier (3rd): "I have not super sensations, yet. This is not a disaster, but I'm still missing some things... "

Pablo Rodriguez Guede (5th U23): "This is the first time I ran the French Cup. I liked the course. I'm pretty happy with my place. The fitness comes well ... "