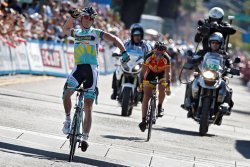 Stage one of the 2013 AMGEN Tour of California took place in extreme hot conditions. Vacansoleil-DCM debuted in a special Celeste-outfit dedicated to sponsor Bianchi and showed it to the big crowds in Escondido.

An attack of Westra in the last 10k and staying cool in the final sprint with his companion (Mancebo) in the break gave him the win: "I got dropped on the hard final climb but managed to come back. In a small bunch I noticed not all teams were complete and it meant possibilities for a late attack. When the early break almost got caught I attacked immediately. Mancebo happened to be very strong an I was patient enough to wait in the final kilometer so I could take the win.”

Westra also took the lead: “It is great to win here and it shows you have to believe in your chances also when you are dropped.”

After a spring with a lot of top-10 places the 30 year old Dutch rider went to his house in Spain to prepare for the second part of the season. When the American press asked him if he could win the Tour he answered: “We will see, my climbing legs weren’t good today but they can’t get worst.”

A few riders in the team had a bad day. Sport director Hilaire Van Der Schueren noticed that it was really hard: “In these temperatures upto a 40 degrees Celsius nobody feels really good. Some of our riders got cramps and had to fight to be in on time. Hopefully they get used to the conditions during the week.”