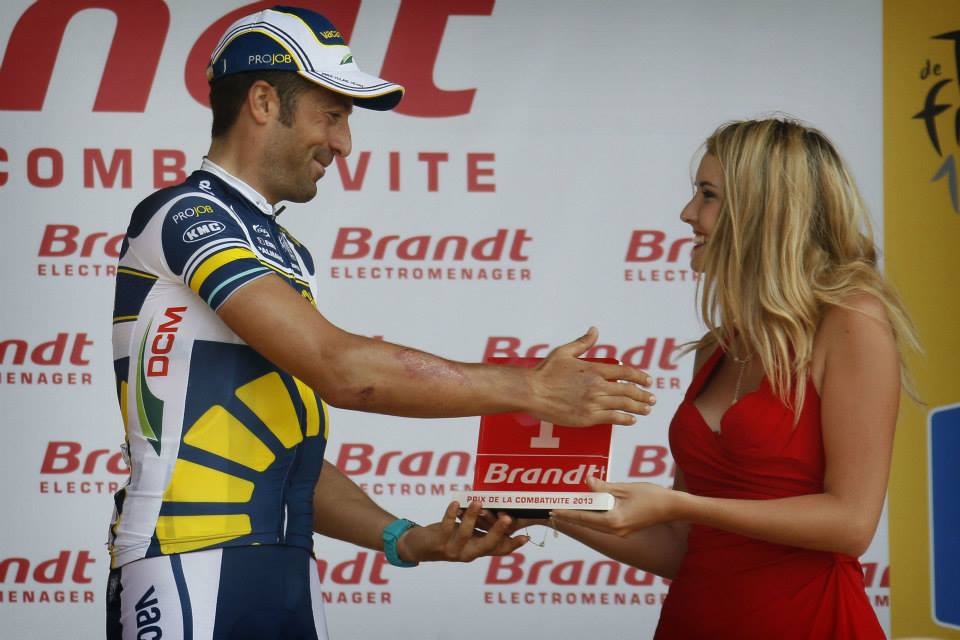 Juan Antonio Flecha knows the sweet taste of a stage victory in the Tour and wants to experience it again, ten years later. Today he went for the attack for the third time this Tour, almost bringing despair to the sprinters’ teams by keeping up his effort for a very long time. It came to a bunch sprint nevertheless, but the Vacansoleil-DCM rider was awarded the prize of most combative rider.

Flecha’s performance was ideal for the team’s sprinting trio, but a crash prevented Kris Boeckmans and brothers Danny and Boy Van Poppel from taking part in the bunch sprint. “We were behind André Greipel’s sprint train, but before I knew what happened we were on the ground”, Boy explains. “We were perfectly placed and I was ready to lead out Danny. Fortunately nobody got hurt badly”, the elder of the two says. “Maybe there’s a new chance tomorrow.”

“We went full gas in the breakaway for 50 km in order to make the gap as big as possible”, Flecha explained to the assembled press after the finish. “We did not get more than nine minutes. One rider was having trouble keeping up and that may be what cost us victory. I can imagine the sprinters’ teams have cursed me for not giving in. Maybe they had to make an extra effort for which they might pay the toll later. I’m happy with my ride today. As a team, we are really doing well in this race and the atmosphere is great. There will be more chances and we are going to take them!”

Flecha also appreciated the ‘Prix de la Combativité’. “Still, I went for the win. You never know if it will work out or not. I am not a real climber nor a real sprinter. I can do a bit of everything. Then you have to take the chances as they come. It’s a pity our own sprinters crashed. But today was, all in all, a great battle and I have enjoyed it.”