GT Bicycles’ Factory BMX Team athletes Felicia Stancil and Sean Gaian earned one of the highest achievements in the sport of cycling over this weekend in Auckland New Zealand…. UCI World Champion! 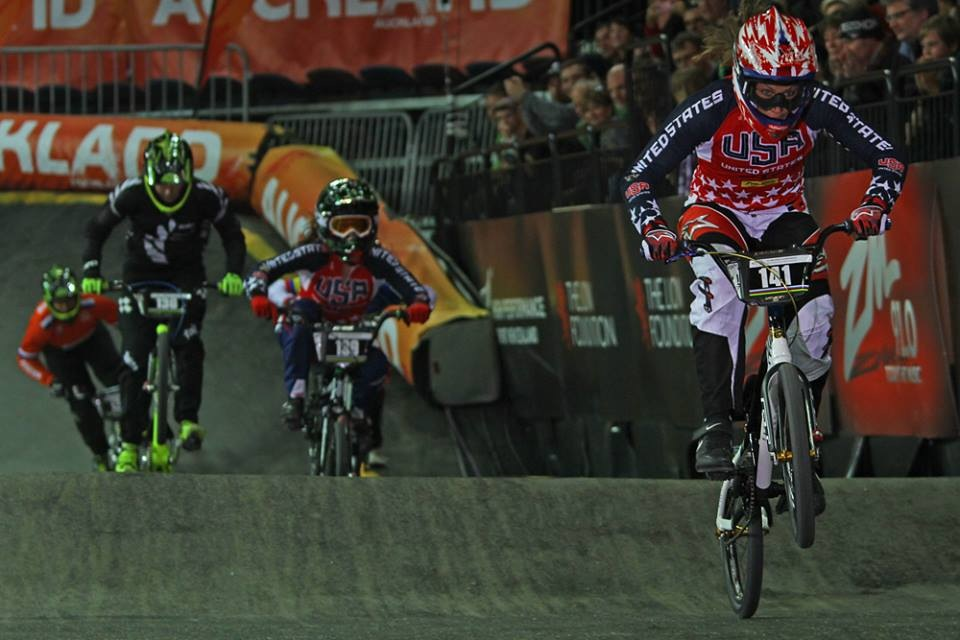 Felicia Stancil came into the event with a target and a huge weight on her back. She was the 2012 Junior Women’s UCI World Champion in both the Time Trial and the race formats but also she was just released a few weeks prior by her doctor to ride her bike. The Illinois native had suffered a major crash at the first UCI World Cup in Manchester England in April where she came away with a laundry list of injuries such as a lacerated liver, broken collarbone, punctured lung and concussion. Immediately after the accident Felicia was antsy to get on her bike and be back training but her injuries were sever enough to where she could not do anything for a couple months. Felicia was released by her doctors around the first of July so she headed straight for the Olympic Training Center in Chula Vista California to get back into the grind under the guidance of USAC team coaches Jamie Staff and James Herrera. With only a couple of weeks of riding and training time Stancil would be on a flight to New Zealand as a funded member of the USA Cycling Team. 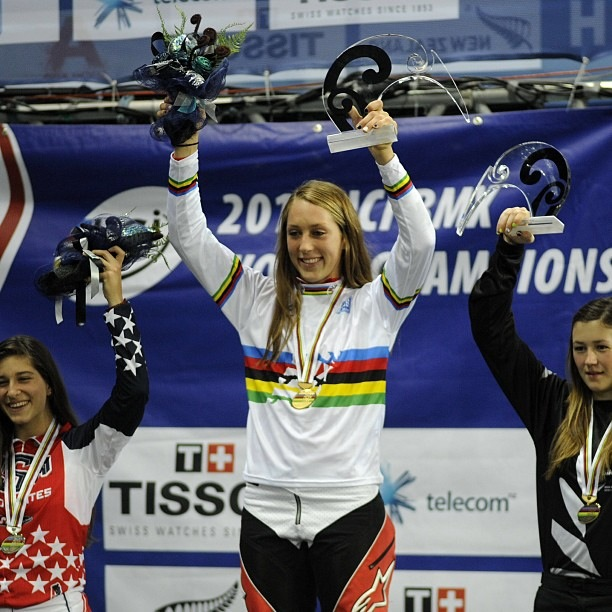 Now for the real test, loading up eight competitors at a time and narrowing down the field to the top-8. Flyin’ Felicia impressed all and even herself with her solid riding with just being back on the bike for a few weeks. She dominated all of the qualifying rounds all the way to the final. With so many factors to consider in such a short race a riders focus is key. Felicia put it all together and won start to finish and crossed the line by nearly eight bike lengths. The dual wins etch Stancil into the history books as the first person to repeat back-to-back titles. Congratulations Felicia! 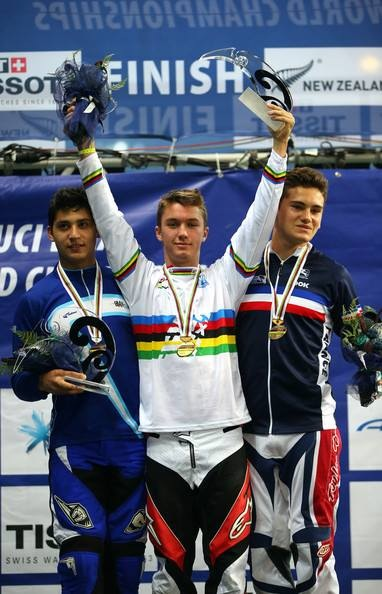 On the Junior Men’s side the competition was fierce with 62 of the worlds fastest racers gating up with one another to do battle to earn the coveted “Rainbow Stripes” and bragging rights as the World Champion. GT’s Sean Gaian came to Auckland as the lead and youngest member of the Team USA Junior Men’s squad. The competition did not think Sean would be a factor with small, thin frame but the “stickman” has one of the best first straights in the game along with incredible skills and track speed. Gaian proved this by finishing 2nd in the Time Trial and gaining the attention of all of his competitors.

During the elimination rounds Sean proved to be dominant by winning nearly all of his rounds. Sean carried the momentum through to the finals where he had gate priority taking the inside gate position. Being the smallest competitor in the gate didn’t hinder Gaian as he jumped out to the front controlling the race. He stretched out his lead crossing the line earning the title as the 2013 World Champion! An amazing feat for the life-long Sand Diego resident who has his sites set on the 2016 Olympic Games in Rio de Janeiro Brazil.

In the Elite Women’s category Manon Valentino of the French St Etienne/GT team looked incredibly fast over the weekend. The women’s division has had some of the most exciting races of the year and Manon had a hard fought race in the final taking the Bronze medal (3rd). Great racing Manon! 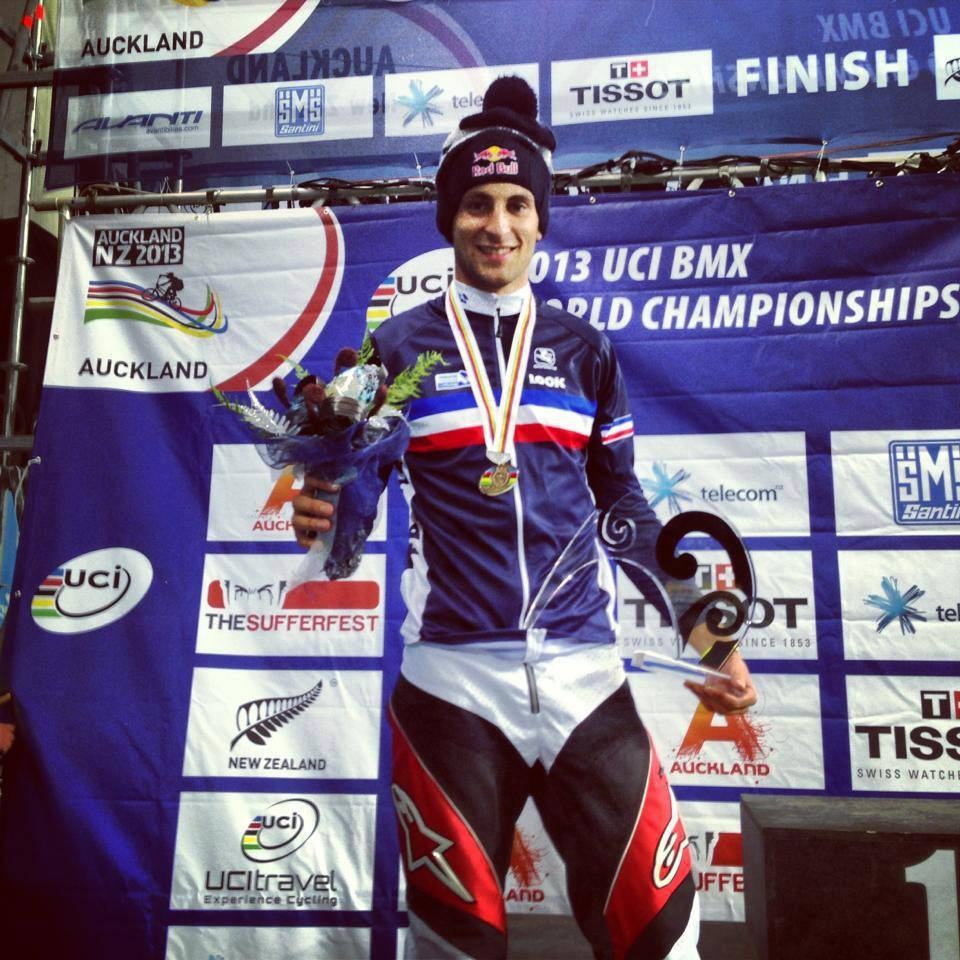 Other incredible performances were turned in by other members of the GT Factory Riding Team. 2011 Elite Men’s World Champion Joris Daudet of France took the Silver Medal in the Time Trial and was looking to be well on his way to be battling for a top spot on the podium in the race until an unfortunate tangle in his semi main kept him out of the Final. Dutch team member Martijn Jaspers has shown improved form this season and just missed the podium in Elite Men’s by taking 4th.

It was an amazing World Championships for the GT Factory BMX Team. We at GT Bicycles are proud of the team as they are not only great champions on the track but incredible people off the track. Keep up the great work team! The team will now take a short break to reflect on their performances and to prepare for the upcoming North American UCI race in Louisville Kentucky to be held the first of September.