KMC sponsored Team Dimension Data rider Mark Cavendish stole the show during stage 3 of the Tour de France by powering to an incredible photo finish sprint victory over Andre Greipel (Lotto-Soudal). It would be the 28th Tour de France stage win of the Team Dimension Data for Qhubeka sprinters career, and his 2nd victory at this year’s edition of the race after his stage 1 triumph.

Stage 3 is the second longest stage of Tour de France 2016, with the riders completing the course from Granville to Angers, a trek of over 223.5 kilometres.Team Dimension Data for Qhubeka were again looking to deliver Cavendish to prime position for the finale in Angers, after extensive research went into the final kilometers of the stage by our African Team. With 8km to go and the break caught, our African Team started putting its plan into action as Bernhard Eisel lined Reinardt Janse van Rensburg, Edvald Boasson Hagen, Mark Renshaw up in front of Mark Cavendish.

The young South African, Janse van Rensburg, was instrumental in determining the final result as he put in a huge turn from 6.5km to go until 2.5km to go. Boasson Hagen was then in control as the pelototwent under the kilometer to go banner, before Renshaw piloted Cavendish to prime position from where to launch his sprint. The Manxman came off the wheel of the German champion in the final 150m, as both riders lunged for the line. The finish-line photo showed that Cavendish had won by a mere tyres width over Greipel and Bryan Coquard (Direct Energie) took 3rd place.

Another incredible win for Team Dimension Data for Qhubeka and Mark Cavendish, who is now, with 28 stage wins, tie 2nd with Bernard Hinaultfor the most number of stage wins at the Tour de France ever. After today’s magnificent team effort, Cavendish moved into the lead in the Green Jersey points competition with 123 points and Peter Sagan (Tinkoff) 2nd, on 116 points.

Mark Cavendish – Rider
I am incredibly happy with this second win at the Tour de France. We planned it for a long time this morning, we had a long team meeting about how the finish would go and it went pretty much exactly how we planned. It’s good that the guys stayed calm and collected. It would have been easy for them to have pulled and then got out of the way with the hectic final, but they stayed patient. Edvald stayed patient, Mark stayed patient and then at the right minute I was able to get on Andre Greipel’s wheel. I knew he’d hit it early, actually he was stronger than I thought he’d be. Andre has guts, he rides like that. I actually didn’t beat him in the sprint, I beat him with the lunge. This is another great win for the team but more importantly, it raises the profile of Qhubeka yet again, and that is the reason we are here. 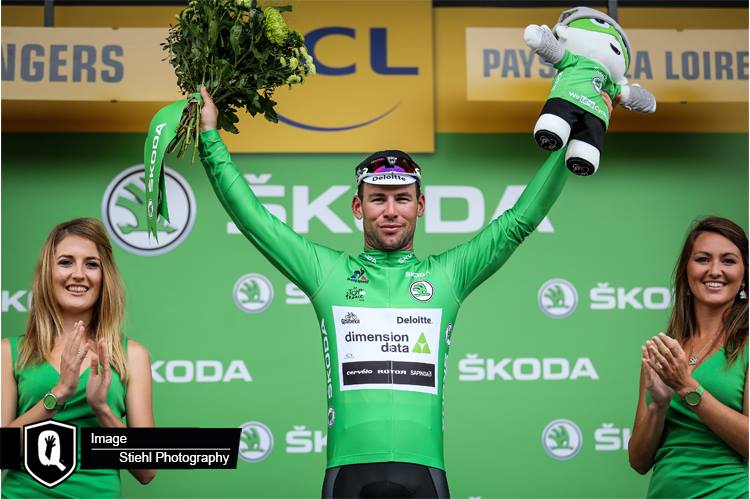