[KMC Riders] GEOX-TMC STAND OUT ON ROADS THROUGHOUT THE WORLD: Vuelta a Burgos, Tour of Denmark and the United States of America
Updated : 2011-08-09 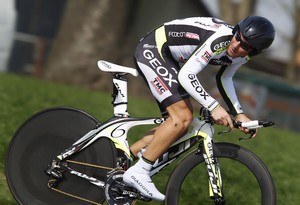 The GEOX-TMC jerseys are making their mark on roads all over the world. These last few days the team has been busy obtaining good results on all fronts, in Europe at the Vuelta a Burgos and in the Tour of Denmark, but also in the United States where they’re participating in the Tour of Elk Grove, in Minnesota, which will be followed by the Tour of Utah.

On Sunday, August 7th, in the last stage of the Vuelta a Burgos with a climbing arrival in Areniscas de los Pinares, Spaniard Juan Josè Cobo came within inches of success, settling instead for second place, just 5 seconds behind the stage winner, Spain’s Mikel Landa (Euskaltel-Euskadi). Cobo did a great job, sticking with the best in all the stages and on all the climbs. Cobo also took third place in the final classification of the brief Spanish race, which was won by Joaquim Rodriguez (Katusha).

“I would have liked a stage victory - says Cobo -, however, I’m happy because I’m coming out of this race with proof that I’m in good shape. Here at the Vuelta a Burgos all the team moved very well. This is especially important as we work up to the big date with the Vuelta España.”

On the roads of the Tour of Denmark our greatest moment was seeing Daniele Colli back at high levels, after the serious physical problems he suffered. The Italian rider was consistently among the first in all the final sprints, obtaining eighth place in the general classification won by Australian Simon Gerrans (Sky) , and third place in the points’ standings. And there wasn’t just Colli; the entire GEOX-TMC “green line”, particularly Pelucchi, Alberio, Brandle, Corti and Gianetti, were looking good on the Danish roads.

“Since my return to racing, every day has been a small victory for me,” explains Colli. “To see my conditioning improving race after race and being able to keep up front with the best is a great morale boost. Before the end of the season I’d like to give a nice result to myself and my team, which has put so much faith in me.”

The American transfer also got off to a good start. In the second stage of the Tour of Elk Grove, Gianpaolo Cheula took third place and GEOX-TMC is actually leading in the team rankings. Three stagiaires are also making their debuts in the GEOX-TMC jerseys on the roads of America: Maurizio Gorato, Tino Thomel and Albert Torres.