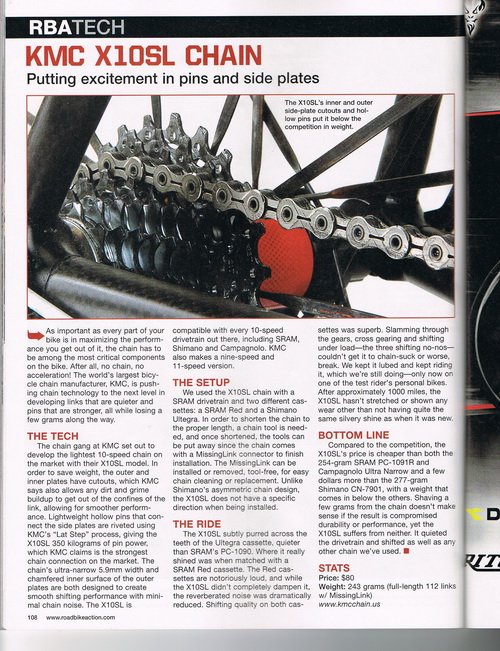 As important as every part of your bike is in maximizing the performance you get out of it, the chain has to be among the most critical components on the bike. After all, no chain, no acceleration! The world’s largest bicycle chain manufacturer, KMC, is pushing chain technology to the next level in developing links that are quieter and pins that are stronger, all while losing a few grams along the way.

The chain gang at KMC set out to develop the lightest 10speed chain on the market with their X10SL model. In order to save weight, the outer and inner plates have cutouts, which KMC says also allow any dirt and buildup to get out of the confines of the link, allowing for smoother performance.

Lightweight hollow pins that connect the side plates are riveted using KMC’s “Lat Step” process, giving the X10SL 350 kilograms of pin power, which KMC claims is the strongest chain connection on the market.

The chain’s ultra-narrow 5.9mm width and chamfered inner surface of the outer plates are both designed to create smooth shifting performance with minimal chain noise.

The X10SL is compatible with every 10speed drivetrain out there, including SRAM, Shimano and Campagnolo. KMC also makes a nine-speed and 11-speed version.

We used the X10SL chain with a SRAM drivetrain and two different cassettes:a SRAM Red and a Shimono Ultegra. In order to shorten the chain to the proper length, a chain tool is needed, and once shortend, the tools can put away since the chain comes with a Missinglink can be installation. The Missinglink can be installed or removed, tool-free, for easy chain cleaning or replacement. Unlike Shimono’s asymmetric chain design, the X10SL does not have a specific direction when being installed.

The X10SL subtly purred across the teeth of the Ultegra cassette, quieter than SRAM’s PC-1090.Where it really shined was when matched with a SRAM Red cassette. The Red cassettes are notoriously loud, and while the X10SL didn’t completely dampen it, the reverberated noise was dramatically reduced.

Shifting quality on both cassettes was superb.

Slamming through the gears, cross gearing and shifting under load-the three shifting no-nos couldn’t get it to chain suck or worse, break.

We kept it lubed and kept riding it, which we’re still doing –only now on one of the test rider’s personal bikes.

After approximately 1000 miles, the X10SL hasn’t stretched or shown any wear other than not having quite the same silvery shine as when it was new.

Compared to the competition,the X10SL’s price is cheaper than both the 254-gram SRAM PC-1091R and Campagnolo Ultra Narrow and a few dollars more than the277-gram Shimano CN-7901,with a weight that comes in below the others. Shaving a few grams from the chain doesn’t make sense if the result is compromised durability or performance, yet the X10SL suffer from neither. It quieted the drivetrain and shifted as well as any other chain we’ve used.