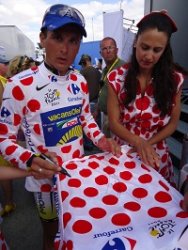 During the first week of the 2011 Tour De France, there was a multitude of serious accidents. Due to injury, many riders had to quit stages or worst, forfeit the entire race.

On the 9TH stage, Johnny Hoogerland with the Vacansoleil-DCM Pro Cycling Team was involved in an unfortunate accident with a car, another rider and eventually a barb wire fence. Despite the accident, he still gritted his teeth to complete the stage. He was again awarded the polka dot jersey in an emotional awards ceremony.

On the 6th stage, Hoogerland received 3 points through his leader status. Also on the 4th stage got 1 point. During the 6th stage, he attained the polka dot jersey. He wore this until the 8th stage where the polka dot Jerseys was taken by Tejay Van Garderen of the HTC team.

On the 9TH Stage, Hoogerland had a determination to wear the polka dot Jerseys again. On the first and second climb he kept the second place and got 4 accumulated points. For the following 4 climbs, Hoogerland kept the leader status and he got 18 accumulate points.

Unfortunately, when Hoogerland passed the 6th climb before the final 36 kilometers, a French TV car hit Juan Antonio Flecha of the Sky team fell off the cycle and then hit Hoogerland resulting in him running in to a barb wire fence.

Hoogerland told the press that he is happy that everyone is safe. After dressing his wound, Hoogerland keep going to complete the competition. He began No.138; however, in the end, he received the polka dot jersey and was named the most combative rider on the 9th stage.

On the path to championships, and when striving for personal goals, KMC XSL series chains are the best choice to accompany riders looking to pursue victory.